The project was funded by DfT under the Funding for Innovation: Cooperative Intelligent Transport Systems. The project formed part of a £4m Government funding programme for technical projects that aimed to cut congestion, speed up journeys and clean up the environment. The project (with a budget of £285k) was focused upon delivering GLOSA technologies for freight vehicles and was implemented between April 2017 and March 2018.

Testing and trials were conducted on the A45 corridor, a primary route between Coventry and Birmingham, covering a 5-mile section from Birmingham Airport towards Birmingham city centre. The geographic location is indicated in Figure 1 below. GLOSA was operated on 10 junctions along the corridor, which implement a mixed set of traffic control regimes, including co-ordinated adaptive control using SCOOT, local adaptive control using MOVA, fixed time operation and vehicle activated operation, allowing the testing of GLOSA across a range of traffic control mechanisms. 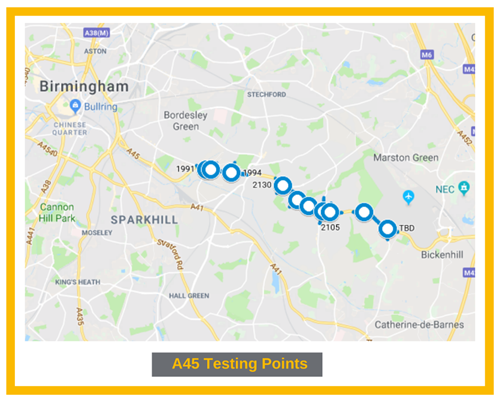 GLOSA information was presented to drivers using a trial mobile App developed for the project. The project was focused on testing the practicality of using legacy infrastructure rather than what is an effective interface for conveying GLOSA information to drivers, so the App displayed a limited amount of relevant information for the current junction (assuming prior knowledge of the network, and some training on the aims of the trial). This included Time To Green (TTG) indicating the waiting time whilst stopped at a junction, and remaining green, or Time To Red (TTR) whilst moving on approach to a junction; for the latter a speed recommendation was also given, indicating the speed required to pass through the junction just prior to the green ending, within certain limits such that inappropriately high (above the speed limit for the road) or low (less than 10 miles per hour) speeds were not recommended. The App could present information both visually and audibly.

The key outcomes or findings can be summarised as follows. It is possible to effectively implement GLOSA and similar C-ITS use cases requiring junction timing data using a centralised approach with pre-existing infrastructure. Further, it is possible to provide effective timing data for GLOSA in adaptive control situations running SCOOT, as significant information regarding its adjustment of signal timings is available in a timely fashion, and such adjustments tend to be gradual.

It is significantly more challenging to provide effective timing data for MOVA controlled junctions, although there may be some practical adjustments to MOVA parameters that can be made so as not affect junction performance significantly but provide

Intuitively from a driver perspective GLOSA is effective and has the potential to make a difference to vehicle performance for up to 20% of junction pass-throughs.

Some of the data sets required to successfully implement GLOSA using the C-ITS standard G5 messaging are challenging to obtain from legacy data sets. For example, road topography and geospatial data for the generation of MAP messages was not trivial and in many cases the specific data required by MAP was not available - such as specific lane connection data.

The solution as implemented is transferable to other local authorities running SCOOT systems, although this needs testing in practice. It is theoretically transferable to other systems where centrally recorded data regarding the timing of junctions is made and recorded/reported in real time. Again, this requires testing to determine practicality. 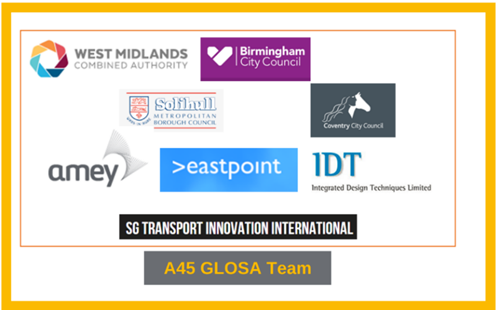 The A45 GLOSA project has demonstrated that a GLOSA service can be implemented using existing roadside infrastructure and communications networks.  An important factor in choosing the implementation was its transferability to other Local Authorities traffic signal systems, and those using SCOOT/UTC systems in particular.  This, effectively, is the minimum requirement – anywhere running a UTC/SCOOT system can adopt this approach provided there is sufficient wireless communication coverage at street level (this being nearly all urban areas in the UK for example).

Further, the approach itself is transferable to other systems where real-time junction timing data is available centrally (through the development of a piece adapter software to obtain the timing data), whether they are adaptive or fixed time.

It is important to note that the implementation leverages an open-standard approach defined in the UK for the transfer of information from a controller to an RSU, known as CROCS, effectively an XML-based implementation of the key ITU ITS-G5 messages required for GLOSA, SPaT and MAP. This is used in all communications paths where transfer of GLOSA messages is required and aids the transferability of the solution. (Note: strictly, CROCS is an ASN.1 definition of SPaT and MAP which was encoded using XML encoding rules -XER – for this project; it could be encoded in a binary using other common encoding rules where bandwidth, for example, is more of an issue, such as on a roadside V2I interface using standard WiFi protocols)

One next step could be to extend the app to provide in-vehicle messages about network issues, and would require extending CROCS to support other ITS-G5 messaging such as DENM. This is something being considered for Midlands Future Mobility, the Meridian/CCAV/InnovateUK funded public space CAV test bed, that includes the part of the road network covered by this project, and in which both Amey and TfWM are partners. It is worth noting that Midlands Future Mobility will also subsume the UK-CITE infrastructure in a similar manner and has the potential to offer various V2X testing capabilities as “quick wins”

A key challenge/issue is the availability of good data – specifically detailed geospatial data in a format useful for C-ITS (MAP message) – road lanes, where stop lines are, etc – as this is not traditionally necessary for UTC/SCOOT and therefore not often available from legacy systems. The current extension of the project is looking at the practicality of automatically sourcing the geospatial data from other data sources (eg OS ITN/Mastermap)

Be part of our team

A Holistic View of a Data Centre’s Assets

Bad actor detection for the NCCU